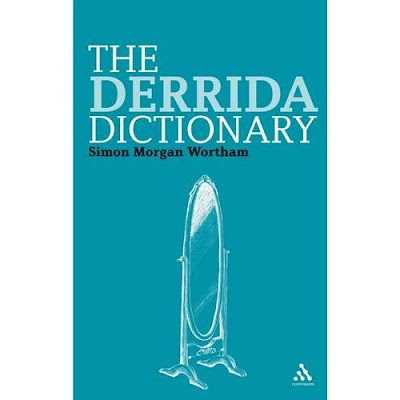 Simon Morgan Wortham is Professor of English at Kingston University London, UK. His previous publications include Counter-institutions: Jacques Derrida and the Question of the University (Fordham University Press, 2006) and Samuel Weber: Acts of Reading (Ashgate, 2003). “ 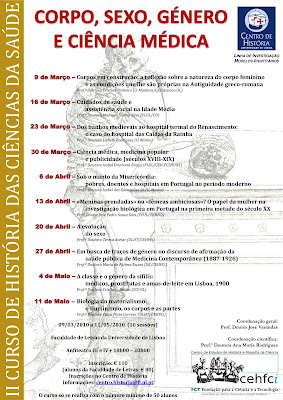 The ancient myth of Prometheus deals with the decline of energy resources. Energy is a gift of the Gods. Since Prometheus, the titan, cheated the father of the Gods at the sacrifice meal, Zeus takes away the fire from humanity: raw food can no longer be turned into cooked food, the embers of the blacksmiths go out. It is the end of technology before it had even begun. There is no more fire in the oven which provides a pleasant microclimate in which family sociability can develop as well as scientific ideas or the dreams of poets. Only an outrageous deed can bring back the fire to man: Prometheus lights a long fennel stick at the sun chariot of Helios and with its preserved embers, gives back the fire to humanity. Zeus’ punishment is terrifying: through Pandora’s Box he sends fever and sudden death, desperation and misery into the world. Prometheus himself gets chained to the Caucasus deprived of food where the eagle Ethon eats his liver, which grows back every day to the immortal. Only Herakles’ power can save him from his predicament.

The age-old question as to where our energy comes from is as topical today as ever. In fact it is the question of all questions for the future: fossil fuels are running out, or can only be obtained at high risk and enormous costs. The world’s population explodes, and so does our energy consumption. Their waste products damage the climate just as much as other ecological systems. Their permanent waste storage causes many problems. Nowadays humans are even taking fuel from Helios’ chariot. Renewable energy such as sun, wind or waterpower is intended to replace fossil fuels. The solution to all energy problems, as promised by the energy industry and futurology, could be solved by nuclear fusion or even star power stations.

But the questions of where our energy comes from cannot merely be solved technically. It is also a question of how humans saw themselves as energy generating and using beings in the past and see themselves in the future. Not only scientists but also artists, psychoanalysts, information theorists, cultural studies experts, researchers on creativity and last but not least esotericists speak of “energies”. Energy is without doubt one of the most important concepts of modernity. The days where only one myth told us where our energy comes from, which rivalries it produces and which social relevance it has are long gone. Science itself takes the place of the myth, whose achievement it has always been, to put into words the whole complexity of being and its origin. But simple answers are not to be expected anymore, and certainly not from technological innovation alone. Right at the side of the technician Prometheus stands his brother who keeps acting as his shadow. In contrast to his brother who always is the foresighted one he is always too late. Epimetheus, who received Pandora’s Box from Zeus although his brother had warned him not to do it, has to reconsider in hindsight the effect that gift had had. The question where our energy comes from can only expect a satisfactory answer within a cross-generational society of people practicing fore- and hindsight.

The summer academy will be a combined event of public evening lectures that are meant for a broader audience and a closed “master seminar” open only to selected scholarship holders and some invited guests in which excellent scholars of various disciplines work and discuss with junior scientists. The senior fellows from a group of scholars working on the subjects mentioned above. The junior scientists are recruited by way of a call for papers and a separate request to the promotion committees of academic foundations or to international graduate schools. The participants will be 5 tandems of 2 senior fellows, 30 junior scientists and approximately 15 students with high potential. The summer academy will last 10 days, the classes will be taught separately and together. The classes will be complemented by the daily evening lectures which are open to the public as well, a supplementary program with special guests with practical experience in literature, music and theatre, a film program on the “Prometheus” theme and an “Energy Tour Ruhr”. The conference languages are German and English. The event will be prepared and revised with regard to content, organised and coordinated by an assistant designated for that purpose.

Scholarship:
All selected applicants get a scholarship between 600€ and 800€ to cover the expenses

The results will be published in two books.

1) Curiculum vitae
2) List of scientific publications
3) Answer the question: (about 4.000 signs): »Where does our energy come from?«

4.) Concrete Nomination of a theme for a short speech in the class (about 2.000 signs).

THINGS AND SPIRITS: NEW APPROACHES TO MATERIALITY AND IMMATERIALITY

THINGS AND SPIRITS: NEW APPROACHES TO MATERIALITY AND IMMATERIALITY

This conference is aimed at exploring new ways of approaching the tensional
and intimate connections between ‘things’ and ‘spirits’ across distinct
practices and epistemologies. In recent decades, the theme of materiality
has gained wider currency and centrality in social sciences and
anthropological theory. A growing number of scholars in the anthropology of
religion, material culture studies, and history and sociology of science and
technology have been reexamining the partition between humans, material
objects, and immaterial entities, along with the ideas of agency, evidence,
and materiality itself. A double shift towards (i) a radically generalized
view of agency and (ii) the ontological complexity of things, spirits, and
humans is cutting across distinct approaches in the anthropology of
religion, science studies, and material culture studies. However, although
they seem to share a novel attention to the tropes of materiality and
agency, they do not necessarily agree with the angles from which these
issues should be analyzed. Moreover, the extent to which the themes of
immateriality and spirituality should be accorded analytical weight is
unequally present throughout these approaches. For example, if it seems
clear that “spirits” must have a place in the study of religion it is less
obvious how the study of immaterialities would look like in the analysis of
scientific and technological artefacts.
By bringing these scholarly approaches into closer dialogue, the conference
Things and Spirits: New Approaches to Materiality and Immateriality aims at
developing new perspectives and finding common ground in the history and
ethnography of things, spirits, and their relations to humans. It will
provide a timely opportunity for scholars to explore further the synergies
between ethnographical and historical methodologies in the analysis of
materiality and immateriality. In addition, it expects to offer students of
religion, material culture, and science a privileged occasion for mutual
engagement and theoretical and methodological cross-fertilizing.
We will take as a point of departure that what counts as “things” and
“materiality”, what counts as “spirits” and “immateriality”, and, still,
what counts as “agents” are issues to be determined empirically. As such, we
invite anthropologists, historians, and students of science, technology, and
material culture to analytically address the multiple arrangements of things
and spirits by engaging with empirical material.

SUGGESTED TOPICS
Submissions of papers are encouraged that address one or more of the
following topics:
• Materiality and immateriality in religious and scientific theories
of evidence;
• Plurality of notions and modes of agency across distinct scientific
and non-scientific theories and practices;
• Boundaries between material and immaterial;
• “Things”, “spirits” and the dynamics of colonial encounters;
• Iconoclast and iconophile projects of religion building,
destruction, or conversion;
• Materiality and immateriality of power;
• Machines, material technologies and their connections to the
immaterial.

The conference will take place at Institute of Social Sciences, University
of Lisbon, Lisbon, Portugal, on 15, 16 and 17 September 2010
(www.ics.ul.pt). The conference is designed as a small meeting so to
encourage exchange of ideas and group discussion. Accordingly a limited
number of participants will be selected. We expect graduate and
post-graduate scholars from the fields of the humanities and social sciences
to participate.

"An anthology of writings on exhibition practice from artists, critics, curators and art historians plus artist-curators. It addresses the contradictions posed by museum and gallery sited exhibitions, as well as investigating the challenge of staging art presentations, displays or performances, in settings outside of traditional museum or gallery locales."

Inside the White Cube 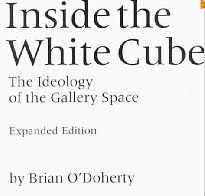 Inside the White Cube: The Ideology of the Gallery Space
by
Brian O' Doherty


"When these essays first appeared in "Artforum" in 1976, their impact was immediate. They were discussed, annotated, cited, collected, and translated - the three issues of "Artforum" in which they appeared have become nearly impossible to obtain. Having Brian O'Doherty's provocative essays available again is a signal event for the art world. This edition also includes "The Gallery as Gesture," a critically important piece published ten years after the others. O'Doherty was the first to explicitly confront a particular crisis in postwar art as he sought to examine the assumptions on which the modern commercial and museum gallery was based. Concerned with the complex and sophisticated relationship between economics, social context, and aesthetics as represented in the contested space of the art gallery, he raises the question of how artists must construe their work in relation to the gallery space and system. These essays are essential reading for anyone interested in the history and issues of postwar art in Europe and the United States. Teeming with ideas, relentless in their pursuit of contradiction and paradox, they exhibit both the understanding of the artist (Patrick Ireland) and the precision of the scholar. "

This book is a must! 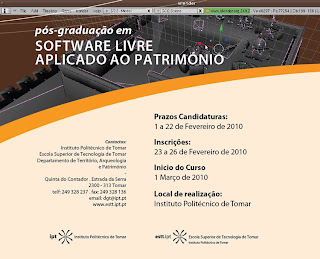 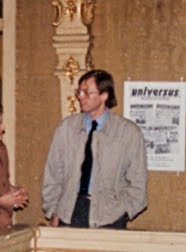 Ian Hodder in Lisbon, Universidade Lusíada, during a symposium on spatial archaeology. 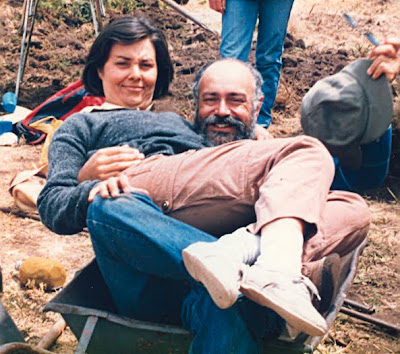 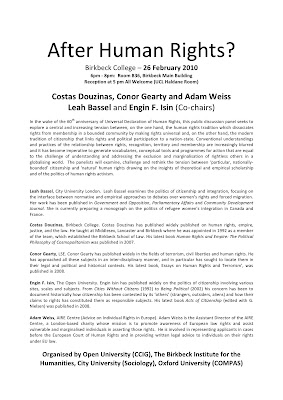 Birkbeck Institute for the Humanities 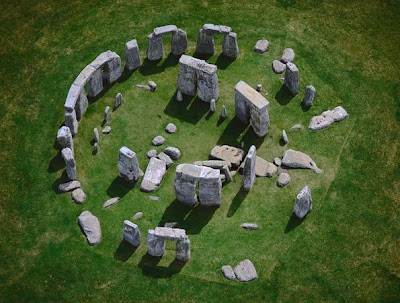 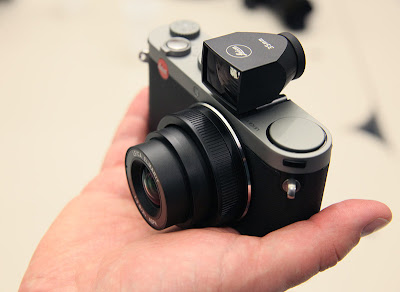 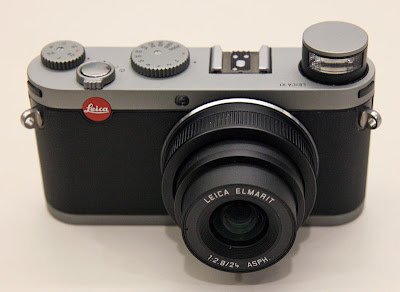 ARCHAEOLOGY AND THE POLITICS OF VISION IN A POST-MODERN CONTEXT

Cambridge Scholars Publishing - www.c-s-p.org - Amazon.uk: click on the image above

Castanheiro do Vento: a labyrinth...a place of multiple transformations and transferences

Acerca de nós / about us